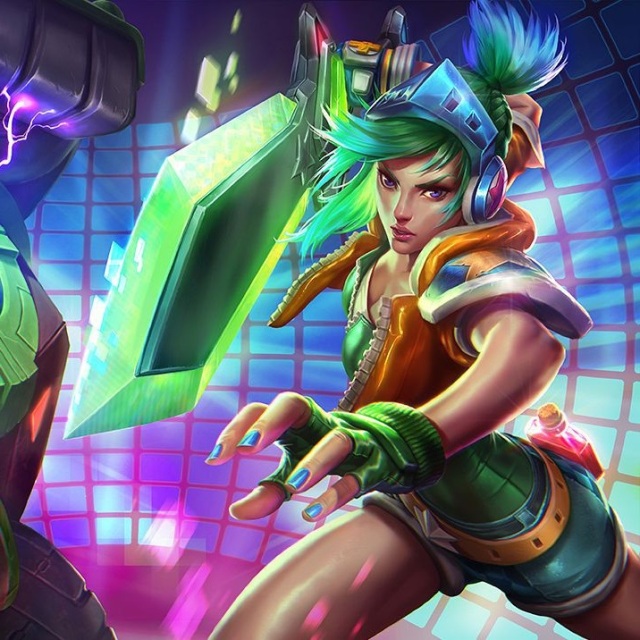 Arcade Riven FROM LEAGUE OF LEGENDS

“What is broken can be reforged!” And what is an awesome skin… can be cosplayed!

Arcade Riven was actually an interesting next choice of cosplay for me, as (somewhat inspired by my half-Red cosplay) I wanted to create a cosplay centered around the prop more-so than the actual costume. Shortly after debuting Star Guardian Lux at PAX Prime 2015, I started work on my Broken Sword. And now, almost half a year later, Arcade Riven has been completed!

All components of the cosplay made by me, with the exception of the white tank top and shoes :D

This was my first time ever making a jacket, so instead of brute forcing my way through creating a pattern myself, I leveraged the wonderful resources across the internet on basic hoodie construction. I used this tutorial on POPSUGAR to get the core patterning and construction down, combined with this tutorial from What the Craft on how to attach the sleeves. Since I decided to add a lining layer, I used this reference guide from PatternReview which is a bit of a wall-of-text read, but has some helpful tips to keep in mind when adding a lining layer.

After learning the power of basting from my Cardcaptor Sakura egg bag, copious basting was done to keep the hood as minimally bunchy and misaligned as possible.

There were a few (read: a lot) of ugly inside edges resulting from the hood and lining layer. A little bias tape was sewn in by hand to clean up the edges a bit, and the jacket was completed! As a little extra detail, you can kind of see in Arcade Riven’s 3D model that there is a little light green button on her hood. I covered a 1.5″ button with green fabric (the same I used for my zip-front top) and sewed that on.

I decided to make the top a leotard rather than a regular tank top, mostly because I didn’t want to deal with shoving my top down my shorts all day (because this normally happens I think).

I drafted my pattern by interpolating the outline from a two-piece swimsuit I owned. Construction ended up just being a patient piecing-together of the different panels. Concerned that all of the inside seams (from having so many panels) would be scratchy, I added a smooth inner layer.

As a side-note, the fabric I used happened to be really shiny on the front side. To avoid assaulting photographers with shine during conventions, I opted to use the back side of the fabric (same color, but without the sheen!)

I kept the panels largely rectangular (and not cut to pattern) at first, mostly to give myself some leeway when it came time to test fitting the pieces into the leotard shape. A lot of patient pinning (safety pins!) and fitting was done to slowly revise my paper pattern into a more reasonably fitting fabric version.

Basting was most definitely necessary here due to the slippery and stretchy nature of the fabric I used, and the fact that there was both an inner and outer layer to keep aligned at all times. It ended up being a little strangely shaped, but it fit! And, at least the weirdly shaped parts would be covered up by the rest of the costume :)

The shorts were the most time-consuming fabric piece I’ve made so far in my experience with cosplaying. I typically like working with knit fabrics so I can cheat my way through form-fitting clothes, but something about making a patchwork design with stretchy fabrics did not seem like a good idea. I ended up choosing Kona cotton for the shorts and, after spending an uncomfortable amount of time in the fabric store, realized that cotton fabrics have a larger array of colors than I ever could have hoped to find in knits ;A;

I started out by tracing a pair of similarly fitting shorts to use as my pattern (a few tutorials I read through were The Ribbon Retreat and The Crafty Novice). Once I had the rough pattern, it was further segmented into what the patchwork panels would look like so I could better size how big the patches would be.

And then on to the fun stuff: the patchwork.

After making my Poképillows, some lessons learned were to have diligence when lining up my corners, and also to IRON EVERYTHING. Lots of pinning with done. Lots of ironing was done. Lots of patience was summoned… But nobody came.

Having this many tiny squares in one place was just asking for bulking to happen, so I was a bit more careful with my seam pressing (referenced this guide from Craftsy). Also paranoid to be working with a fraying non-knit fabric, I made sure to prepare all of my patchwork squares with pinking shears, and then serge the edges of my completed patchwork panels.

The quilted panels were then pieced together to make the general pattern for my shorts. An invisible zipper was installed onto the side (I used this tutorial from Craftsy, however the included instructions with the zipper would also suffice.) The cuffs were sewn on mostly by hand to try to conceal the seams.

The scarf was made by making a tube (you’re going to see a lot of tubes in this tutorial if you keep reading…) and then carefully hiding all of the seams where they would not be readily seen D: I used the same base fabric as the one I used for the shorts to try to keep that color palette consistency.

Snaps were used in order to keep the scarf close fitting, but still capable of being removed (given the severely non-stretchy nature of the fabric).

For both the right-hand navy glove and left-hand green glove, pretty much any glove tutorial on the internet will work. I stuck with a basic trace-your-hand, sew, cut, and good luck tutorial. A few things to note though, are to trace the fingers a little bit longer than your actual fingers, and to make the stitches that go in the tiny notches between your fingers more “boxy” as opposed to “angular” (I’ve found that this helps the glove look a little neater when you turn it back right-side out).

For Riven’s power glove, I cheated a little and made it more of an arm warmer than a finger-less glove style. Since I didn’t care much for a form-fitted glove, it ended up just being another glorified tube.

I was stuck between making the belt out of Worbla vs. just buying a similar one. In the end, I settled on what I was most comfortable with: fabric! And most importantly, tubes!

The belt itself is just one massive tube made with the same yellow sweatshirt fleece as the jacket (color palette consistency!)

To keep the belt stiff, I added a strip of heavy interfacing, and coerced it into the tube with polite yet firm massaging. The belt detailing was done using the buttonhole-making feature on my sewing machine (didn’t think I’d ever use it but hey, it seemed to work). The belt closed via hook-and-eye closures, chosen for no particular reason other than because I happened to have a lot of sets available…

The knee pad was made simply by making a trapezoid-like shape (a tube again) that fit snugly around my knee. Edges were all folded in neatly to try to give it a cleaner finished look. Also important to note that for the seams that needed to be stretchy, zigzag stitch was used to maintain the stretchiness!

The legwarmers were made by tube-ifying some leftover fabric from the jacket (color palette consistency!) and then made fluffy with some layers of craft batting massaged inside.

The helm was made as much from scratch as possible, for no reason other than to make this as frustrating as possible for me. The earpieces were made out of craft foam, generously massaged into as circular a shape as possible, and then smothered with Worbla.

The top part of the helm was made from EVA foam sheets, with the edges “finished” with layers of craft foam (which could have smoothed by dremeling but eh).

The Worbla was smoothed with several iterations of the Gesso-sanding method and then spray painted to finish!

The pauldron was made in a similar fashion as the helm, with the main structure being made of EVA foam sheets, and the detailing done in craft foam.

With some more patient Gesso, sanding, and painting, the pauldron was completed!

After my Star Guardian Lux cosplay, it was safe to say that I had some experience with making tiny stars…

The star buckle for the belt was made from craft foam with the creases scored with a knife. The craft foam was then slowly massaged into shape along the scored creases.

The knee pad was made from massaged craft foam. It was a little tricky getting it into a shape that wouldn’t look too bulbous when my leg was extended, but would actually fit around my knee when my leg was bent.

Since I’m not much of a wig stylist, I used a Jaguar from Arda Wigs in Light Green (we can pretend that I was channeling classic Riven hair :x).

For makeup I used ‘Hero of Ages’ from Shiro Cosmetics for eyebrow color masking. Nails were done using ‘Submerged Siren’, a Sailor Neptune inspired indie nail polish from Yume Lacquer (who unfortunately at the time of this posting is not currently open :C).

This was officially the longest I ever spent on a cosplay project – about half a year of on-and-off work from PAX Prime 2015 to FanimeCon 2016 ;A;

General lessons learned from this time around:

On a positive note, this was also the first time I was able to use my Egg Bag for its intended purpose as a cosplay day bag :’)

Overall it was a wonderful (albeit a little warm) debut for my Arcade Riven. Now I guess it’s just on to the next project!

COSPLAY PATTERNS AND PROPS CREATED BY ME!
COSPLAY PHOTOGRAPHY BY MICHAEL LEN!